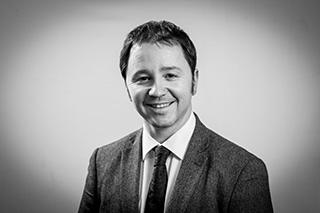 Garry trained with Macnabs, and right from the outset of his legal his training was focused on court and tribunal work. After qualifying, he spent a two-year period working as a solicitor with a local authority, during which he gained useful insight and experience in a number of niche areas of law, such as Adults with Incapacity, and he is often appointed as Safeguarder by the court in Adults with Incapacity applications.

Over the years Garry has developed his reputation in representing and appearing for clients in the resolution of disputes wherever they need him in the Scottish Courts and Tribunals. This can be anything from debt actions, to property disputes, to employment tribunals.

Garry’s specific areas of civil court expertise are in Contract Disputes, Property Disputes, Debt Recovery, Negligence Claims and Employment Law. Garry is also enthusiastic about taking on unusual civil cases, bringing in an advocate with the necessary specialism if required. In addition to Civil Court Representation, Garry also represents his clients in the criminal courts when the need arises, providing them with the necessary reassurance and one-to-one representation that makes the process less stressful than it often otherwise is.

Garry regularly advises both employer and employee in both contentious and non-contentious employment issues. From advising on redundancy consultation and selection processes, to drafting and advising on settlement agreements, to discrimination claims, Garry helps both employees and employers through the difficult period that many currently find themselves facing. He is also very experienced in conducting Employment Tribunals and appears regularly at Court.

Unlike many court solicitors at the larger national firms, Garry deals with cases from start to finish for his clients and regularly appears in person in court. When clients instruct him for a case, they know that Garry will be their solicitor throughout the case which is why his loyal client following regularly return to him for assistance when the need arises.

Garry has maintained his knowledge in Licensing Board and Tribunal matters from his time clerking those at the local authority, and deals with appearance work for clients of the firm in both.

He is also a tutor of Civil Advocacy on the Diploma in Legal Practice at Dundee University, passing on what he has learned over the years to future generations of civil court solicitors.

Garry is married with three children and lives in the beautiful Perthshire countryside. His pastimes include walking the family dogs, playing football, cycling and skiing.

"It was a comfort to us, after a traumatic and stressful experience, to work with Garry. His experience in this field was obvious. He gave sound, well-balanced advice and we felt confident in his capable hands. Regular communication was very appreciated. He kept us up to date at every step and any queries we had were answered promptly."